There are different types of Arabica coffee beans called cultivars, all of which are known for their different flavors and attributes. Although some cultivars thrive better under some geographical conditions than others, they do not refer to the region in which the particular coffee is grown. Instead, they are a result of botanical variety when different species or sub species are interbred.

Of the many cultivars that are in existence, some of the most popular ones are mentioned below:

Typica: This cultivar can be grown in any coffee producing region. It is the cultivar from which many other cultivars have been developed. Typica coffee trees have a main trunk with secondary trunks that grow slightly slanted. The lateral branches form an angle of about 50–70° with the vertical stem to give the tree an overall conical shape. Although typica coffee trees are low yielding, they nonetheless produce a delicious, high-quality beans.

Bourbon: There are many variants of bourbon; like Typica, a lot of cultivars were developed from Bourbon. Originally developed by the French in 1708, this particular plant was cultivated on an island in the Indian Ocean called “Bourbon” now known as Reunion. Bourbon has broader leaves and larger cherries than Typica. Like typica, it is also a conical-shaped plant. Bourbon produces 20–30% more fruit than Typica and it produces a rich tasting brew.

Caturra: Discovered in Brazil, and named after the town in which it was discovered, this cultivar is an altered version of Bourbon. Although it was discovered in Brazil, it thrives better in Colombia and South America to produce a vibrant brew with a zesty essence. Like Bourbon, it has broad waxy leaves with wavy edges; however, it is shorter with a thick and bushy appearance. Although Caturra has a higher yield than Bourbon, it produces a lighter brew and requires a lot of care in order to thrive.

Catuai: This cultivar was a result of a cross between Caturra and Mundo Novo. Like Caturra, Catuai is a short and bushy plant that produces a high yield. Catuai requires a lot of attention and fertilization to thrive, and it yields yellow or red cherries that produce a fruit-like taste.

Mundo Novo: This is a hybrid that was formed in the 1940s as a result of the crossing of Bourbon coffee and Typica coffee. This high yielding cultivar is resistant to many diseases, and its harvest comes a bit later than other types of coffee.

Blue Mountain: Grown in Jamaica, this cultivar came about as a variety of Typica coffee and is known for its resistance to the coffee berry disease. Blue Mountain coffee thrives at high altitudes and is commonly grown on the Blue Mountains of Jamaica after which it is named. 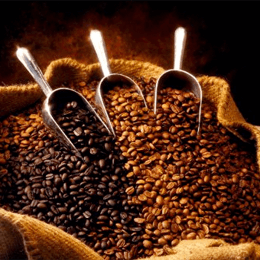